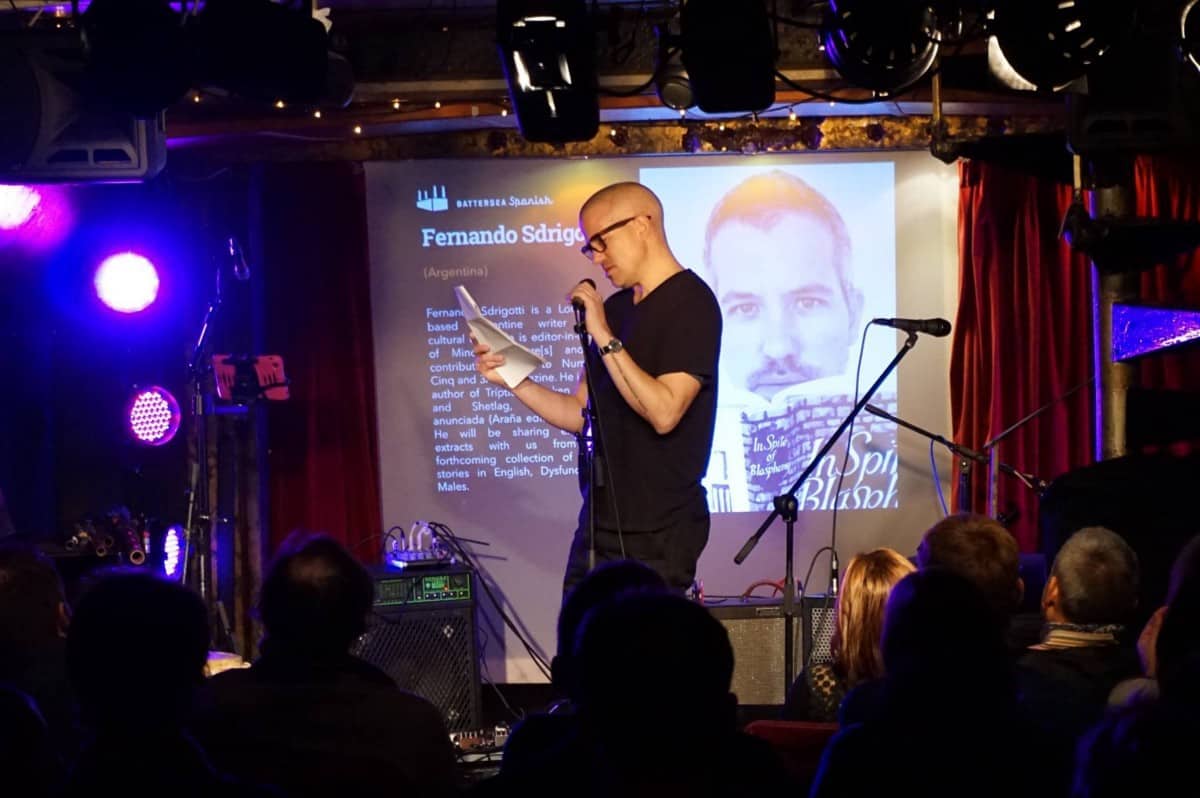 Resting on its hull, the boat sits patiently like a sage, knowing well it’s fate will soon rise up. For the tide is a slippery promise and as the sun’s warmth turns to embers, the river soon starts to climb the sides of the boat until the hull is submerged entirely. Still anchored, the boat starts to sway.

By this time, people have already started to arrive. Clambering on to the Battersea Barge, they come with faces fresh and pink, puckered by the November air, their smiles betraying an excitement for a journey that lies ahead. As they come down into the lower deck, they perceive beyond the rows of cushioned chairs, a cabaret stage that twitches and blinks as its spotlights are adjusted. “1,2,3, testing” the crowd hear as they order drinks at the bar. The artists ready themselves for the show, some reading through their texts, others tuning their instruments. Tonight is our Cultural Cabaret and this boat is loaded for Latin America.

The crowd soon makes its way to the seats and we open up the evening; an invitation to travel through the works of some of the most exciting artists and cultural figures based here in London who study, write, live and breathe Latin America.

We start off in Costa Rica with Carlos Fonseca, although as a writer who later grew up in Puerto Rico, California and now residing in London, Carlos is a man of the world and his debut novel he shares with us tonight, Coronel Lágrimas, an insight into the mind of a demented but brilliant mathematician, also oozes nostalgia for all the countries he knows. The boat falls silent and gently rocks to the tempo of crafted verse and small river ripples.

As Carlos finishes, a flautist comes into the light. Had no one spotted him before? The melody takes us somewhere else, lifts us up into the mountains, to the Andean peaks of Colombia. This is Mauricio Velasierra, one of Colombia’s finest musicians and artisan of traditional Andean flutes. After his melody subsides, he is joined on stage by Russell Slater, editor of the Latin American digital magazine soundsandcolours.com, the boat now moored in the history, music and culture of Colombian folk music.

As their presentation finishes, Brixton-based author Leila Segal comes on to the stage. She stands tall and places herself before the spotlights. Into the microphone, she pours a story that trickles down into the audience and gradually, word after word, starts to paint an entirely new picture; a picture of Cuba. We find ourselves in the Caribbean heat as we hear extracts of Breathe, a collection of stories capturing everyday Cuba as seen by Leila. The audience are transported, again, and as she finishes her last words, a huge round of applause confirms an accumulated delight of having travelled so far already this November evening.

The rhythm changes like a sudden gust of wind in the sails; we are now in Caracas and Caracas keeps you on your toes. It is the turn of Pablo Navarette, British-Chilean film maker with an extract of his documentary on Venezuela; Hip Hop Revolución. On the big screen, we spy the city streets, its buildings’ facades laced in graffiti and falling plaster, the houses of the barrios painted pink, blue, green, yellow, red; the ebbs and flows of hip hop and youthful grit now steer this boat. We stay in Venezuela as percussionists Wilmer Sifontes and Henry Bravo come on stage with the last frames of the film, to sit behind huge wooden bongos and continue the beats we started with Hip Hop, until we hear that Hip Hop is ancestral, is African, is Afro-Caribbean too and before we know it, we are all on our feet and cheering.

The atmosphere is now plump with excitement and at the interval, you can barely move for all the people up and about, grabbing drinks, food, and opportunities to meet the artists who they have seen and heard thus far on stage. It’s an exchange like no other, like the ones you make with charming strangers abroad.

The second leg of the journey sees our vessel navigate up the coast and back into Colombia, where Spanish journalist Lorena Cervera greets us with an open smile. Her latest documentary 2nd UP portrays the life of 12 Colombian girls from underprivileged backgrounds studying classical music and it’s a story that reflects her own life; her sensitivity capturing the smiles and nervous giggles of our latest protagonists. It’s a delight to hear Lorena share so candidly her world and that of these girls.

As the film comes to an end, two figures make their way to the stage and the audience unexpectedly encounters a different side to Latin America and her artists. Have we capsized? All of a sudden, we hear poetry recited in Quechua, we see liquid sipped out noisily from two straws in a glass, a hoover even is brought on, its chugging motor given the microphone to express itself, as if it has always wanted to do so but never been given the chance. Close your eyes and it sounds like the winds of Patagonia. This is Chilean and London-based performance artists Montenegro Fisher with their piece PACH A MA MAAAAA. They really need no introduction.

This sensory diversion shakes up our compass, and South America become London and London becomes South America. Turns out the big smoke is also Latin and home to Fernando Sdrigotti, an Argentine writer and cultural critic whose stories build bridges between both his homeland and this city where he has lived for 15 years. He shares with us Turkish Delight; a humorous account of two friends one afternoon in Notting Hill. His identity of a Latin American is more complex than beef, football and tango, he later tells us.

A different vision indeed, followed by a different sound as our final act of the evening, Bitch N Monk take to the stage, running the ship home like the figurehead at the prow . This progressive two-piece band, formed by our Andean flute player Mauricio and Heidi Heidelberg, make music like no other, an assorted collection of sound coming out of an electric guitar, various flutes, synthesisers and eerie vocals. They are later joined on stage by our Venezuelan percussionists Wilmer and Henry, ending the evening in an explosion of sound that could only come to fruition in a Latin American London.

Before we know it, the Battersea Barge has docked and furls from the sky its invisible sails. It has served its purpose well. As the audience starts to filter out and face the winter cold, they struggle to find their balance, having to adjust again to land after such a momentous aquatic trip. Many embrace each other and mark new numbers and email addresses into their phones; “Let’s stay connected!”, we all say. “This journey has only just begun.”

Find out where Battersea Spanish is going next